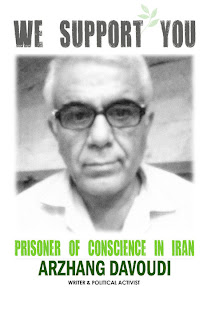 On Tuesday, June 1, political prisoner Arjang Davoudi was taken to the 10th branch of the Revolutionary Court in Karaj from the isolated hall 12 Cellblock 4 in Gohardasht (Rajayi Shahr) Prison, where it was announced to him that he had been sentenced to an addition 10 years and 8 months of prison after years of trials and being kept in an undetermined condition in prison.
He was also told in court that new charges will be brought against him for [crimes he committed] during his years in prison and that he will be transferred to the 1st branch of the Bandar Abbas Revolutionary Court for a trial.
This is while, political prisoner Arjang Davoudi lives in Tehran and was arrested in Tehran and according to the law, has to be tried in Tehran. It is still not clear for his family and lawyer why he is to be tried in Bandar Abbas.

According to reports, on the verge of the appointment of a UN Special Rapporteur for Iran and the Rapporteur’s trip to Iran in the future to investigate the violations of human rights in Iran, Iran officials intend to send resistant political prisoners to distant locations where the Special Rapporteur would not have access to them. (Human Rights and Democracy Activists in Iran – Jun. 5, 2011)